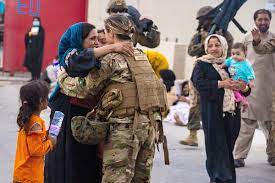 Thousands of people fled Afghanistan after the Taliban seized back control of the country last August. The U.S. flew some 74,000 Afghans out of Kabul, many of them now living in temporary housing (military bases, hotels and other housing) in our country until they can be sponsored for resettlement into permanent homes.

In partnership with at least two other Presbyterian churches in the area, FPC is raising funds to apply to a government program and ultimately resettle an Afghan refugee family in the Georgetown/Round Rock area. Other churches also may join us.

Session approved a Mission Committee motion on March 22 to pursue the Afghan Refugee Resettlement initiative or mission. In February, Session had voted to allow FPC members to contact other congregations and nonprofits to be involved.

Five representatives from FPC, Round Rock Presbyterian and Grace Presbyterian in Round Rock have formed a “Sponsor Circle” to make application for a U.S. State Department program to resettle ­Afghan refugees (www.sponsorcircles.org). Our representatives are retired Air Force Col. Dennis (Denny) Boroczk (our church’s advocate for the mission) and Bonnie Stump, a medical doctor who practiced in George­town as well as the Democratic Republic of the Congo and Pakistan.

It is anticipated that other churches will join in this effort.

Plans call for the Sponsor Circle to apply to Mission Presbytery for a “Better Together” grant, awarded to a church that partners with other entities to address mission and ministry projects.

“I see this as a true humanitarian cause, one worthy of our time and talents,” Denny said. “With current events in Europe, I also see a growing need for refugee resettlement. There are, by some estimates, more than 28 million displaced persons in the world. That startling figure is growing hourly because of what’s going on in Eastern Europe.”

In February Mission Committee elder Dawn Bookert had a conversation with Tim Airhart of Round Rock Presbyterian, who wanted to gauge interest in a Sponsor Circle. FPC member Katherine Kubatzky, who put Tim in touch with Dawn, has been involved with him in Mission Presbytery disaster response activities.

After discussion, the Mission Committee made the first motion to Session to begin the process of our church’s involvement. Other committee elders are Robert Cravens and Lenice Smithwick.

Pastor Bobby said, “I am grateful for the work FPC and our fellow Presbyterians are doing. It could not be a more timely work. And truly, as people of God’s Word, it is always our work. Time and again, God reminds us in scripture that  ‘the foreigner residing among you must be treated as your native-born. Love them as yourself, for you were foreigners in Egypt’ (Leviticus 19:33-34).”

The Sponsor Circles Program for Afghans was launched last October through a partnership between the U.S. State Department and Rockefeller Philanthropy Advisers. The program creates opportunities for individuals and community groups to support Afghans relocating to the U.S. under Operation Allies Welcome.

“As a result of the recent war in Afghanistan and the evacuation of thousands of Afghans who stood with us during the longest war in U.S. history, there are numerous individuals and families who are still at risk and in need of help,” Denny said. “Through the Sponsor Circles Program, churches and organizations are forming small but effective teams to resettle these Afghan individuals and families, allowing them to start anew and add their peaceful culture to our area.”

The program’s minimum commitment to provide support to a refugee family is 90 days and $2,275 per Afghan newcomer. During that time, sponsors work with the family to connect them to ongoing support available in their communities.

“But with the cost of housing, and the rate of inflation, we think we might need even more than the $2,275—more like about $15,000 total,” Denny said. “In-kind donations of clothes, furniture and other needed items will help reduce this total.”    Round Rock Pres has a head start and has already raised more than $2,000. “The good news is that an FPC member is willing to match a sig­nificant amount of money that is donated,” Denny said.

A detailed resettlement plan is being written by the Sponsor Circle members. It will address such needs as housing, ­basic necessities, education, language, interpretation and translation, cultural connections, employment and transportation.

“We are preparing the welcome plan, a budget and the application for the presbytery grant,” Denny explained. “The Mission Committee and Sponsor Circle are asking for help. We need volunteers to work on the plan’s draft and execution.”

While there are other organizations that facilitate Afghan Refugee Resettlement, the Sponsor Circle Program provides a detailed model for resettlement.