“A Tale of a Shrewd Manager”

The church I served in Virginia had this narthex area that was quite large and quite dark – and purposely so in the original design. There were very few windows. The lighting configuration itself was done in a way so that the whole area was dim even with every light on.

And then make your way through the doors of the sanctuary where suddenly there is an abundance of light and grandeur. And theologically what it was meant to suggest is this move from darkness to light, from ignorance to illumination in the presence of God, from the sin and brokenness of the world to the light and goodness of God’s glory.

And when I read this parable, it is like Jesus purposely went out of his way to stand all of God’s people right there in that dim Narthex, pull forth a real scoundrel who spends his days in such darkness, and declare to God’s people that this guy is what faith is all about.

“There was a rich man who had a manager, and charges were brought to him that this man was squandering his property.”

Like the prodigal son who ‘squandered’ his inheritance on bad living and whose parable comes right before this one in Luke, so too this manager has squandered a great job with his selfish, dishonest accounting.

So, the rich man, the master, summoned his manager and said to him, ‘What is this that I hear about you? Give me an accounting of your management, because you cannot be my manager any longer. ’

Fired. But notably, not punished. Not put in jail.

Which is to say – there is judgment. He loses his job. And there is mercy. There is nothing more than that loss.

Not to say the situation isn’t quite fearful.

3Then the manager said to himself, ‘What will I do, now that my master is taking the position away from me? I am not strong enough to dig, and I am ashamed to beg.”

He’s not a sympathetic character, is he? We might like him to think, “Given what I have done and where I am at, I will take any job available to make an honest living.”

But you know what…if he once was dishonest with his master’s money, let’s give him this: he does seem honest with himself. My body can’t do that kind of work and I’m too proud to beg.

And so, to ensure he can still eat and have a roof over his head, he comes up with a rather cunning plan to ingratiate the neighbors to himself. And we read that he does his plan ‘quickly’ because he does not have much time before the people indebted to the master find out that this manager no longer actually works for the master.

“How much do you owe my master?” And one by one he starts cutting the debts of these people quite significantly. The first cut is about 10 months of labor. The second cut is worth about 13 months of labor.

But boy is this risky, right? It can’t be too long before the manager is discovered. And then what happens?

It seems the shrewd manager has likely calculated two distinct possibilities that the master would have once he finds out that the manager has wrongfully forgiven the debts of these people:

He could tell the people, “Hey, your debt is not actually forgiven. Tack that debt back on” and then the shrewd manager himself would be severely punished. Jail. Saddled with debt himself. Worse. He really is putting his well-being, his future, perhaps even his life on the line with this move.

Of course, with this first option the rich landowner, the master, he would almost certainly face the heavy disappointment and criticism of the people who are surely already throwing a great celebration throughout the area in light of their debt reductions. He could have some very real discontent on his hand if he has to go tack that debt back on.

Or the master could show mercy. He could remain silent about the fact that he never approved of this and he could accept the whole thing – enjoying the significant praise being showered upon him by all the people (“What a generous master we have!”).

This gamble that the shrewd manager is making reminds me of that scene in A Field of Dreams.

Do you remember that moment in the movie where Kevin Costner’s character (Ray) has to convince a complete stranger – James Earl Jones’s character (Terrance Mann) – has to convince Jones that the two of them need to attend a baseball game together at Fenway Park in Boston that very night? And Terrance Mann is this famous activist, author from the 60s so Ray knows of him by way of his books and so forth.

Ray is having no luck convincing Mann to leave his own apartment in Boston and go to a baseball game with a complete stranger so Ray gets desperate.

Without Mann seeing, he puts his finger in his coat pocket like this.

And Mann grabs a crowbar and Ray starts backing up and then trips over a box of files and falls to the ground. Mann raises the bar and Ray, again, knowing Mann by way of his many books, goes, “you can’t do this! You’re a pacifist.”

And Mann, annoyed and frustrated, put down the crowbar. Most fundamentally, he is a pacifist.

The shrewd manager bets that even if the master comes with a crowbar for him because the manager has really gone too far – even so, the master is going to relent because most fundamentally, the master is merciful.

He’s betting the whole thing on the master’s character.

Not only did the plan work, the dishonest manager is commended!

“And look,” we say, “kudos to him for leveraging the debts and the relational capital of the community to secure his own livelihood and further the good reputation of the master but…

…to go to another movie example, it feels like when you are watching Ocean’s 11 and this group of people are pulling of this really ingenious heist of a Vegas casino and then halfway through the movie you are wondering to yourself who it is you are rooting for the very people who really should be going to jail for this.

“Jesus, are we supposed to root for the dishonest people of this age because they’re pretty savvy at moving the ball forward? why are we commending this guy?!”

And then, actually, it gets worse….

“for the children of this age are more shrewd in dealing with their own generation than are the children of light. And I tell you, make friends for yourselves by means of dishonest wealth so that when it is gone, they may welcome you into the eternal homes.”

Tell me the last time you saw that verse framed in the entryway of a house?

There’s a lot we could say here, and for centuries this parable and this section, in particular, have confused scholars… but I think a key to these final verses is listening again to the fundamental thing being commended in the story itself.

“And his master commended the dishonest manager because he had acted shrewdly…” A Greek word equally translated as “prudent” or “wise.”

In Scripture, it speaks to the kind of life that develops out of a lifetime of attending to God and God’s ways.

But over time and especially in our time, those words “wise” or “prudent” and “shrewd” they can collect an “air of stodginess” as Eugene Peterson puts it. They become serious, sober words, words that have connotations of carefulness and not rocking the boat and ‘all mind no action.”

Part of the gift of this parable is that it helps us see that wisdom and prudence are far more expansively understood – and living in God’s wisdom and prudence most definitely entails action and risk and faith. This manager is banking on the character of the master to come or the plan simply will not work.

And Jesus makes clear even if its misguided or selfish – a lot of the Narthex people are better than the “children of the light” Sanctuary people at risking their well-being, their future, quite possible their lives in courageous acts of faith for something better, or something selfish…but something.

And the implied question behind Jesus holding up this shrewd manager is this: could the church learn about faith from the rest of the world?

Is it possible we could use a field trip to the Narthex not to judge, not to point out all the wrong, not even to fix all pain and wrong…but to learn again about what it means to actually risk something that matters?

Have you seen any dishonest managers with shrewd courage to commend? (Again, not dishonestly to commend…but no denying it, they take real risk in the service of what they believe is important.)

Or maybe for this morning as we sit here in a house of worship, we might simply upon Jesus.

Because isn’t there something fundamentally shrewd about a Savior

We worship a shrewd Savior.

The question, then, is this:

If we know the master to be shrewd,

we know his power is made known in humility,

we know his forgiveness is stronger than vengeance,

we know his vulnerable love is stronger than sin, evil, and death itself

and we know he promises never to leave us or forsake us.

If we can bank on this… what step of faith can we then risk?

Would that the children of this age take note of some of those steps and have to admit, “Shrewd people, those Jesus followers. They really do put their well-being, their future, even their life together on the line for the sake of love.” Amen. 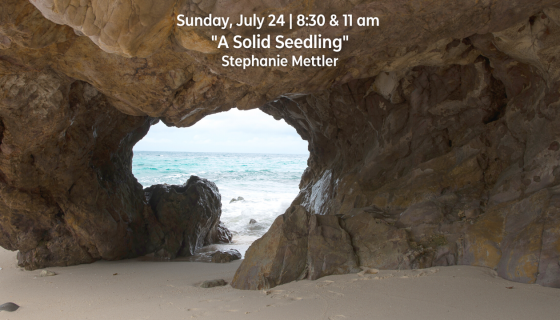 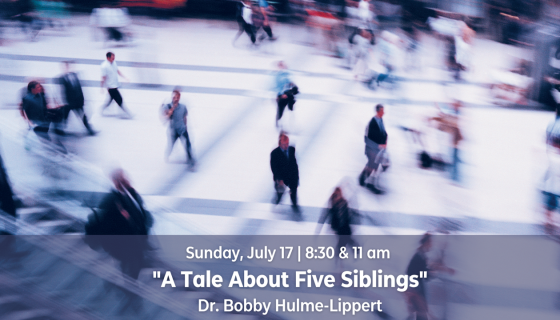 “A Tale of Five Siblings”