My junior year of high school I was a in a trigonometry class, and about this time of the year, I remember how much the whole class was struggling. But if there is always one solace in a math class, it’s that there is some kind of fundamental, reliable equation at work. Right?

Cosine. Sine. Tangent – I know you all have rules that can make this all work.

That’s part of what we love about portions of the Bible like Proverbs, right?

“No ill befalls the righteous, but the wicked are filled with trouble.”

“The plans of the diligent lead surely to abundance, but everyone who is hasty comes only to poverty,”

There is real comfort to be had from solid, predictable life equations.

The problem always emerges when the equation doesn’t add up anymore. When the way it’s supposed to go…it doesn’t go.

And we had this old-school teacher Mr. Russell who often wore short sleeve yellow button down, pocket with pencils and a ruler and a compass.

“Ok, new rule. When we take a quiz, the lowest score in this class will be the score that everybody gets.”

And look, math was not my subject. Really average at it. But I was fired up because I was trying.

My hand shot in the air faster than it ever had in that class.

And I made clear cut argument for why this rule is entirely unfair, some of us are trying really hard, and this plainly can’t be the way our individual grades are determined – my work plus my effort cannot equal someone’s grade. And a math teacher with that kind of pocket – of all people – would get this equation.

“Bobby, you have spoken eloquently on behalf of your classmates. The answer is no.”

Have you ever felt deeply in your bones that you are in the right…but the very obviously correct equation is not working?

Those kind of moments are but a very small glimpse of Job’s fundamental predicament.

We are told that Job is a righteous man. A man who follows God, who fears the Lord. And he has much. He is man of means.

And then one day enemy forces come and take all of Job’s oxen and donkeys and then kill some of Job’s servants all while a fire breaks out and kills still other servants and the sheep. In one fell swoop lives are lost and his entire business collapses.

That same day a great wind strikes Job’s house and killed all of Job’s children.

Here is a good man…and he loses all his wealth.

Here is a good man…and he loses most of his family, all of his servants.

Here is a good man…and he becomes painfully ill.

Worse – eventually people, his friends, they start to blame him. They wonder what secret sin must exist as the reason for such judgment because they know the equation – bad things don’t happen to good people.

And Job himself…he spends chapter after chapter venting and despairing and longing because he wants math that adds up.

Good things happen to good people, and if they don’t then…They get justice.

Job wants people to get what they deserve – especially him – because he is in fact innocent. The story even tells us this fact at the outset.

And he especially wants to get all this settled before God in court.

And with each passing chapter in the book of Job…

Job thinks up ways that he can pack the court in his favor, pack the court with enough evidence and voices such that it is plainly evident that God has done wrong and Job is innocent.

In today’s passage, Job seems resigned to the fact that he will not get a hearing before God in his own lifetime.

So, he expresses this longing to have his true side of the story engraved into stone with his iron pen and lead.

It seems what he wants is to have the engraved letters lined with lead so that the sun will make them glisten so that generations of people who pass by the stones seem the truth glowing in their face. If I can’t have a courtroom in this lifetime, then give me the courtroom of public opinion for all eternity.

Then Job shifts again about how he will be vindicated when he dies.

“But I know that my champion lives and that he will rise last to speak for me on earth, even after my skin has thus been stripped from me.”

A champion, or kinsman, was the closest next-of-kin who would stand up for the rights and legacy of the deceased. It’s a word that could also refer to God but it does seem in context he would really referring to or imagining this next-of-kin person.

“Stand up for” is legal language – the imagery here is, again, a courtroom where this champion will vindicate Job.

Because that is the fundamental place to decide right from wrong, innocent from guilt, vindication from condemnation.

In our day, the courts get a lot of attention. There are so many significant, society-shaping issues that press upon our hopes and fears for this nation…

And because this matters so significantly that things are decided rightly …we’ve seen voting blocs work hard to ensure their side appoints judges at all level of government, we’ve seen advocacy for adding justices to the Supreme Court, we’ve seen intensely heated debates over anyone nominated to the Court…

We’re also quite aware of the court of public opinion and how social media alone allows for powerful public vindication or condemnation.

And then within in our own lives – our own pains, the profound unfairnesses and illnesses and untimely deaths and losses we have known – sometimes we know something of this Job-esque longing for God to explain God’s self because this is wrong.

And whether on a national scale or a localized scale, a macro scale or specific relationship or event or pain…all of us, we want the comfort of some kind of math that adds up.

We want justice to prevail. We want people to get what they deserve, especially ourselves when we are in those moments where we know we are right.

For all the vast differences between Job’s world and our world…I don’t think it’s an accident that both of us care deeply about that courtroom setting as the arbiter. The place where hope has to be made concrete.

Do you know remember what God says when God finally responds to Job?

God of course remains the judge, but boy does God pack the courtroom with all kinds of hand-picked witnesses. And you and I, we know these witnesses. We have seen them, touched them, smelled them, heard them, eaten some of them.

Here’s a list of some of those God brings into the courtroom-moment Job so desires:

Rain and Desert. Stars and Grass. Bears and Cubs. Lions and Goats.

Ostriches and Horses. Oxen and Eagles.

I met someone who used to live in the San Diego area and in the course of this conversation they said, “You know, that season of my life – so many challenging things going on – I would drive to this overlook and take in the ocean just about every other day.”

“I needed to see that there was a bigger plan, a bigger perspective…something bigger than me. And I knew I could trust God again…

It was one thing to imagine the ocean, another to really go see it.”

It was the witness of creation that drew this person back to a living trust in God amidst the broken equation.

Time and again God brings before Job different aspects of creation, and the implied, essential question is this: “Job, if I care for all of this in such a precise and awe-inspiring way…is it possible I bring that same level of attention and care for all that you have brought before me? Is it possible there is more going on than you can see?”

I am mindful that Fall is a season of dying. Decline. Decay. And while the reality of all takes a while longer to show up in this part of the country, at some point everywhere you look you see the dying.

Perhaps it is a season that captures some real sentiments for many of us. But then also, fall is a season where all the dying and declining is what is visible on the surface.

Because fall is also a season of seeding. Countless seeds that will make for the brilliance of spring are sown right now…which is to say there is a coursing of new life entirely hidden to the eye, unfolding right in the midst of the dying and declining.

This sounds exactly like the central hope we have as followers of Jesus who was given an entirely unjust trial and put to death wrongfully and went to the tomb for three, dark days.

And yet Scripture declares that precisely upon the cross and in the space of death itself Jesus conquered sin and death. Precisely in the death there was an overcoming of life at work – one made clear when Jesus rose from the grave.

Walking under leaves dying, stepping onto leaves dead…it draws me back to Job and this idea that maybe truth is not reserved for the courts in quite the way we imagine…maybe we can see God’s truth among the manifold witnesses God brings before us every day. I wonder if God would, in these fall days, have us join with Job and take a walk among some of those witnesses?

By the end of the tour, Job’s word suddenly become few: “Surely, I spoke of things I did not understand, things too wonderful for me to know…” And then, because of this tour of creation, he confesses to have what he had cried out to have in our passage today: “now my eyes have seen you.”

That we might know the gift of that same vision. Amen. 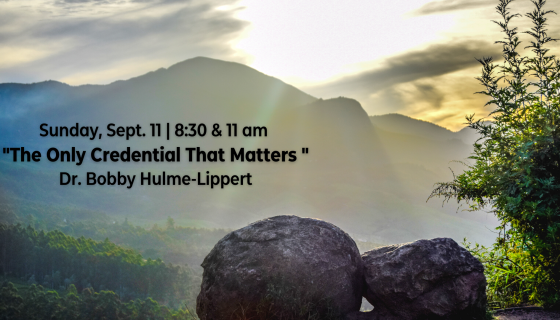 “The Only Credential That Matters”