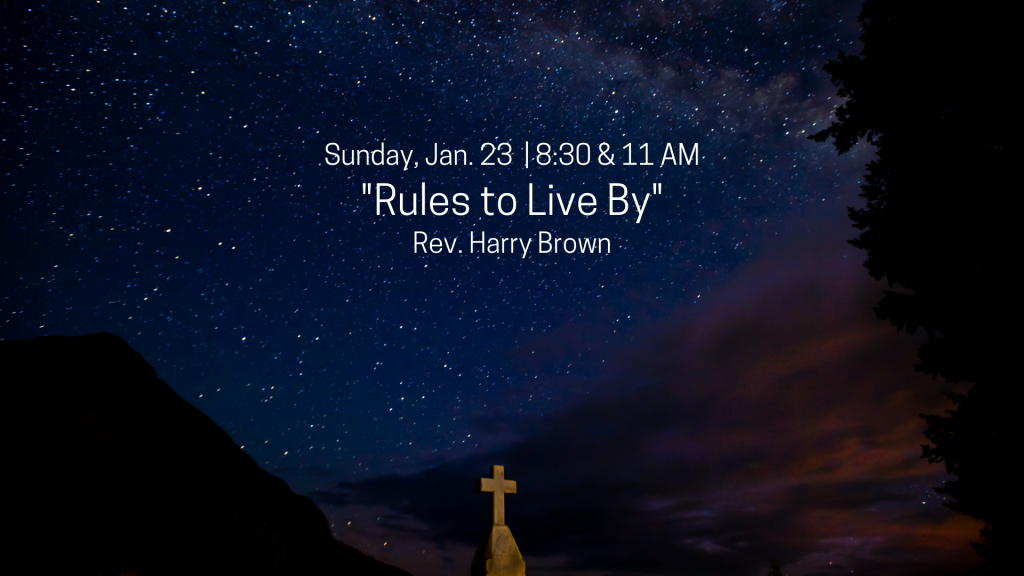 “Rules to Live By”

God also gives us rules to live by and when we ignore them, it often turns out to be not only to our detriment but the detriment of those around us. Likewise, when we follow the rules too rigidly, that also often turns out to be to our detriment and the detriment of those around us. Consider the apostle Paul. Particularly early in his life, he was really big on rules. As a Pharisee he stood at the pinnacle of the Jewish religion and was all about enforcing the law, the rules by which he believed we are intended to live. As a young man, he believed that followers of Christ were wrong and so he vehemently persecuted them. He obtained letters from the High Priest allowing him to arrest any in Damascus who followed Christ and return them in chains to Jerusalem. Letter in hand, Paul headed for Damascus but as he approached the city, a blinding light flashed around him. He fell to the ground and heard the risen Christ take him to task for persecuting him. In that moment, Paul became the lifelong bondslave of a new master. He was told to continue his journey to Damascus and there await further instruction.

The brilliant light of Christ’s risen glory had blinded Paul, and so his companions led him to his lodging on the street called Straight. He remained there fasting and sightless for three days. He was then visited by a disciple of Christ, Ananias, a devout man who greeted Paul as a brother in Christ and laid his hands on him. Paul immediately received his sight and took food and drink. Ananias also acted as a mouth piece of Christ, giving Paul further orders he had been told to expect, bidding him to be baptized and conveying to him Christ’s commission to be his witness to the world.

The incredible grace of God that reached out to Paul and claimed him before he could respond totally reshaped his life. Instead of living simply to carry out the law, Paul began to live to make God’s grace in Christ known. When Paul came face to face with Jesus, the one he had been persecuting, Paul expected the ax to fall. What fell was not an ax but a gracious invitation. Come join us, be one of us. Paul never forgot the sheer incredible joy of that moment. He spent the rest of his life trying to make that grace known.

In his letter to the Thessalonians, Paul gives us some rules for living in light of what Christ has done for us. These rules are not rules we follow to earn Christ’s favor. They are the result of meeting and knowing the grace of God that comes to us in Christ our Lord. Because of the grace that comes to us in Christ, we can rejoice always, we can pray without ceasing and we can give thanks in all circumstances. It is as we follow these rules that we will find the grace and the wisdom to deal with the new reality in which we find ourselves.

The ability to rejoice always flows out of being focused on God. A few years ago, on a beautiful October afternoon, Badger Stadium in Madison, Wisconsin, home of the University of Wisconsin Badgers, was packed. Thousands of diehard supporters were watching their football team take on the Michigan State Spartans. Michigan State had the better team and was easily winning the game. What seemed odd was that as the score

became more and more lopsided, bursts of applause and shouts of joy would burst out in the stands. The question in the minds of the Michigan State fans was, “What is going on? Why are they cheering when their team is losing so badly?”

It turned out that eighty miles away, the Milwaukee Brewers were beating the St. Louis Cardinals in a pivotal game three of the World Series. Many of the fans in the stands were listening to the game and responding to something other than their immediate circumstances. Likewise, when our focus is on God and the grace that comes to us in Christ, we have reason to rejoice even in the most difficult of circumstances.

Such a focus on God requires us to get out of ourselves. Rich Tatum tells of going on vacation and taking his new digital camera. Upon returning, his wife began proudly showing off their latest vacation photos. She would then share her coworkers’ reactions with Rich. After a few days of this, he noticed a recurring pattern. Invariably, people would say, “Wow! Your husband must have a really nice camera.” Even though he was happy that people liked his pictures, he was disappointed. He wanted people to acknowledge what a good photographer he was.

The second rule Paul gives us is to pray without ceasing. One of my mental images of this comes from Teyve in Fiddler on the Roof, for whom life is prayer and the events of the world are in interruption. One of the delightful things is the way Teyve excuses himself in the middle of his prayer to deal with the things that are going on in his life. As Christians,

Unfortunately, we often try to live life on our own. A classic example comes from baseball back in the days when Yogi Berra was catching for the New York Yankees. It was the ninth inning with two outs, the score tied and the bases loaded. The batter stepped to the plate and made the sign of the cross on the plate with his bat. Yogi looked at the batter, took his catcher’s mitt and wiped out the sign of the cross, saying, “Let’s just let God watch this one.” Too often, that is our attitude. We try to take care of things on our own rather than lifting everything to God in prayer. When we know the incredible grace of God, we don’t hesitate to lift our lives to God in prayer and new insights come as a result.

The third rule from Paul is when we know the incredible grace of God, we find ourselves giving thanks in all circumstances. Mother Teresa told of going out one evening into the streets and picking up four people. One of them was in the most terrible condition. She told the sisters, “You take care of the other three and I will take care of this one.” She did for the woman all that her love could do. She put her in bed and gave her a small drink of water. Mother Teresa said, “The most beautiful smile came on the woman’s face and she took my hand and said two words. Thank you. Then she died.”

As she reflected on this, Mother Teresa found herself examining her conscience. “What would I say if I were in her place?” She admitted that like most of us, she would have tried to draw a little attention to herself by saying I am hungry, I am dying, I am in pain, or something. But the woman gave much more. She gave her grateful love and died with a smile. The more we know and the more we experience God’s incredible grace, the more we find ourselves giving thanks in all circumstances, and this gratitude opens the door to faithfully responding to the circumstances around us.

A man had a severely pinched nerve in his neck as a result of an auto accident. The doctors determined that surgery was not a good option. They put him in traction for two weeks then had a special neck brace made for him and ordered physical therapy. The man was not able to work or do much of anything else. Any sudden movement brought excruciating pain. Desperately needing a change of scenery, the man went out on his patio even though it was a cloudy, rainy day. As he sat there, a bird landed nearby and began to sing. The man couldn’t believe any creature had reason to sing on a day like this.

A week later, the man was on the patio again. This time it was a beautiful day and the bird returned and began to sing. As he listened, the man realized the bird sang because it was part of who it was. Its song was not altered by outward circumstances. It sang rain or shine. The same is true of us. The more we know of God’s incredible grace, the more prayers of thanksgiving flow out of our hearts, and the more our hearts and minds are prepared to deal constructively with the issues of life.

Because of God’s incredible grace given to us in Christ our Lord, we can rejoice always, pray without ceasing, and give thanks in everything. Glory be to God. Amen. 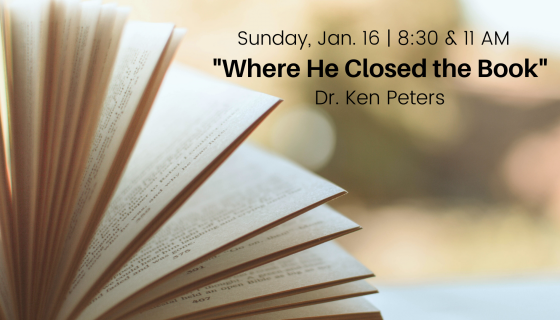 “Where He Closed the Book”