“Take Up Your Cross” – Because You Give Sermon Series

“Who do people say that I am?” Jesus is slowing the pace of his and inviting reflection.

“What are people saying about me? What’s the word on Jesus?”

In our day and time, the answers sound quite different from those offered by the disciples when they say, “John, Elijah, one of the prophets.”

“Who do people say that I am?”

“You are the Messiah.”

Twenty years. Many have been the memories I have considered from my own personal recollections and well as through videos and photos and stories I have read during this past week about 9/11 and the aftermath.

And one of the smaller things I recalled again was how – in the ensuring years just after 9/11 – superhero movies became more and more popular. And the first one that set the tone was Spiderman, released in May of 2002.

The story of the NY City high school student who is shy, awkward, and nerdy…but through a spider bite finds himself infused with superpowers. And with his powers he is able to save the day.

And there is this iconic scene toward the very end of the movie that was added in post-production – most of Spiderman had been filmed pre-9/11, but they added this last 20 seconds after 9/11.

It’s where Spiderman, having saved the day, leaps up to the top of the Empire State Building with the American flag waving boldly…and the first time I saw that movie in the theater still less than a year after 9/1l – it gave me chills.

Spiderman was the first movie ever to make over 100 million dollars on its opening weekend.

…They can both press down the evil, thwart the evil, destroy the evil… even as they save and they raise up the broken, the sick, the tired, the wrongly-treated.

Long were the hopes of Israel for a Deliverer, a mighty warrior to raise high the flag of their people after years of living under foreign rule with mistreatment and constant fear and crushing taxation.

Perhaps, finally, the time is now? he wonders. Do we not likewise have our reasons that now, now would be a really good time for such a Deliverer?

I remember two summers ago standing at one of the memorial pools located on the 9/11 Memorial and Museum grounds in NY City where the towers used to be.

And no matter how many people are out strolling around the area and no matter how beautiful the sun and the sky…when you stand along the side of one of the pools there is a sacred and sobering quiet.

And you look down into this expansive, dark void where one of the towers used to be. And there is water continually falling even as the void never fills. The entire motion of the memorial is one not of ascent but descent.

“Then Jesus began to teach them that the Son of Man must undergo great suffering, and be rejected by the elders, the chief priests, and the scribes, and be killed, and after three days rise again.”

…and so, Jesus’s words lead Peter to the side of the pool. Jesus needs to be abundantly clear with Peter, that while yes, he will eventually rise…his Messiah-ship unfolds not by overpowering, but by way of descent.

Because Living Water is Love…and love cannot help but flow continually unto the voids of human pain and suffering and sin and even death itself.

Love will bear the cross itself for the sake of love.

And Peter took Jesus aside and began to rebuke him. It’s a strong word, “rebuke” – the same word used when Jesus rebukes the wind and the waves. It’s confrontational. It’s pointed.

This descending Messiah who walks a road fraught with suffering and shame…not a picture of the Messiah we often want.

No…no…no. In these kinds of times…

“Time to put people in their place; evil in its place…” “It is time to overcome…”

But turning and looking at his disciples, Jesus rebuked Peter and said, “Get behind me, Satan! For you are setting your mind not on divine things but on human things.”

And can’t you see Jesus’ finger pointing down upon at the falling water?

It is not a picture of the Messiah we often want…

….it is indeed deeply Good News that the God of the Universe in Jesus Christ flows without ceasing precisely into and for that space.

Jesus calls Peter “Satan” which underscores just how seriously Jesus takes this particular point about who he is and what it means to follow him.

“Satan” is “the tempter,” and Peter’s words are trying to tempt Jesus to harness the powers and resources and politics and people-skills and money and weaponry of this world…to be a Messiah-hero…

The way of love, the only way of real and lasting hope, the only road unto rising…it is the way of descent.

How does Paul put it so famously when he encapsulates the very essence of Jesus’ ministry?

(Jesus) did not consider equality with God something to be used to his own advantage;

rather, he made himself nothing by taking the very nature of a servant, being made in human likeness. And being found in human form, he humbled himself by becoming obedient to death—even death on a cross!

Therefore, God exalted him to the highest place and gave him the name that is above every name, that at the name of Jesus every knee shall bow, in heaven and on earth and under the earth, and every tongue acknowledges that Jesus Christ is Lord, to the glory of God the Father.

And having clarified what kind of Messiah he is, Jesus extends an invitation to any who would follow in his way:

“If any want to become my followers (if you want to be baptized and make confession about your follower-ship of me), let them deny themselves and take up their cross and follow me. For those who want to save their life will lose it, and those who lose their life for my sake, and for the sake of the gospel, will save it.”

Which is to say, “Just as I have denied myself the use of heavenly power and might to enact my will and instead chosen the way of love even unto the point of pain and shame (cross)…so, too, any who follow me…let them not hold to their power and protection and places of security (those who seek to save or hold onto their life will lose it)…but let go likewise, make this your posture… and choose the Way that Water flows.”

To be sure, Jesus is not calling followers to seek out suffering or self-flagellate if things don’t feel difficult enough…he is simply making clear that to follow him is to walk the path of descent. This is where love flows, this is how love flows. And inevitably, at some point, in any number of ways, to love is to suffer.

The Living Water of the World has suffered for the sins and evil of this world – including yours and mine. And this very day his love is poured continually unto the deepest voids of this world, this nation, these our hearts…for love cannot but fall to the lowest point.

Have we noticed the faithful water cascading even in this present darkness? Where? When? Who?

And where is he leading? Unto what void does Christ call?

And even if Christ’s love through us steadily pours and the void proves unrelenting – we are held in the assurance that the darkness has not and will not overcome Love.

He is Risen and so all that is done in his name and by his love shall…shall likewise rise. 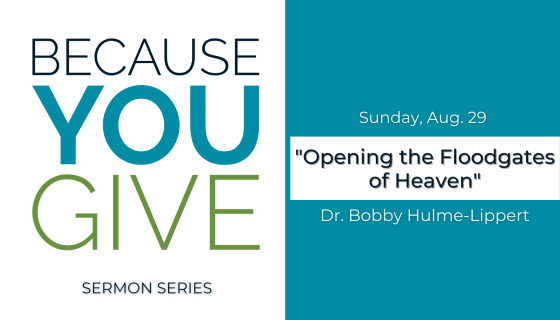 “Opening the Floodgates of Heaven” Because You Give Sermon Series 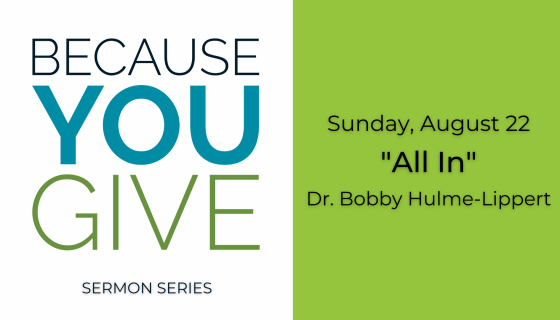 “All In” – Because You Give Sermon Series