“The Gift of Compassion”

A few years ago, Michelle and I visited Chicago to see my sister-in-law perform in The Pirates of Penzance, a Gilbert and Sullivan production with which some of you may be familiar. As we walked into the theater it was in some ways what you would expect: there were seats all around the main stage. Normal, comfortable seats with armrests and cushions. The kind many of us long to enjoy again one of these days. These seats, I should add, were safe. They the ones where the actors did not interact with you or acknowledge that you were even there.

Because there were a whole bunch of other seats available for all in attendance, and those seats were located on the actual set – which was huge. The set was littered with little baby pools with pillows in them. Other areas had benches and there were a couple of treehouses. And you as the theater-goer could choose…you could have normal, comfortable seats surrounding the outside of the stage or you could pick a seat on the stage – in the treehouse, a bench, the pool of pillows. And we knew that if we chose to be on stage there was no chance we would remain in that same spot throughout the whole production.

Because once the show began the actors were moving all over the stage – singing, dancing, walking, running. And whenever an actor needed to stand in the spot where you were sitting, the actor would point at you as he or she began moving in your direction. That was the signal to ‘stand up ’and move somewhere else. Those audience members on stage – they were part of the drama, and so if they were not moving somewhere, they were constantly attentive because – at any moment which they could not predict – they may be needing to react or move again.

At the outset of our passage today in the Gospel of Mark, Jesus and his disciples have no plans to be in the center of the drama, to be at the mercy of the movements of others. This is to be a moment of getting away – they have gotten on a boat and headed for a spot where they can rest for a bit. But, we hear, the crowds track them down. Who are the crowds? We are not told.

What is clear is that Mark does not say “The religious Temple-goers” tracked Jesus down. Or that “those who really wanted to be followers of Jesus” tracked them down. No, what we read is that “crowds” caught up to Jesus – suggesting a diverse array of people and proclivities and personalities. And in a moment when Jesus could have chosen to stay in the boat or turn the boat around…we read instead that Jesus heads into the drama itself. “Jesus went ashore…” we read. It’s a movement emblematic of the entirety of Jesus’s ministry. The Gospel of John most famously summarizes the movement in John 1: “For the Word became flesh and dwelt among us.”The God of the universe does not love us and save us from some distant heaven but becomes flesh, comes onto the shore, enters the drama, and dwells among us. Walks with us.

A few years ago I was in Houston, TX for a course on leadership in ministry. And some of this course was taught a classroom by a couple of recently retired pastors. As part of the class, they took us on some field trips around Houston and introduced us to various Christian leaders throughout the city that we might learn what it is to lead well from their example.

Our first visit was with the CEO of Texas Children’s Hospital – Mark Wallace. As many of you may know, Texas Children’s is the largest children’s hospital in the nation, an absolutely enormous operation. And Mark begins talking about what it is to lead as a Christian. And very matter-of-factly he talks about one of the most important routines of the day.

He explained to us that in one section of the hospital there is a long expansive mall area of about 100 yards in length where all kinds of people are bustling back and forth and working on this and that. It’s busy. And he makes a point each day to walk right through the middle of that area. He budgets a half-hour to go 100 yards. Surely the CEO of a multimillion-dollar endeavor has better things to do with his time than walk down the center of that mall and listen to folks share little bits of their life.

Everyone knows to expect him so any more folks say, “Hey Mark, you have a minute?!” Which of course is never a minute, and he knows it. Yet he was quick to say that walk was one of the most essential things he does because it allows him to draw close and hear from the people.

And what precisely happens when Jesus goes ashore and draws near to the people in all of their fears and failings? All of their pains and weakness? All of their shames and stubbornness?

What happens when Jesus draws close to the crowds and all of their stuff?

“he saw a great crowd; and he had compassion for them…”

“Compassion” – literally means “co-suffering” or “ to suffer with another.”

Or, as one theologian puts it, “a profoundly intense emotional response that propels one feeling compassion into action on behalf of others” (Preaching Mark in Two Voices, 102).

Jesus has a feeling sense of being with the sufferings and pains of the crowd such that he is moved to action on their behalf.

In particular, he has compassion because he sees the people are like “sheep without a shepherd.”

“Shepherd” it should be said, was a common term used in ancient times to describe someone who was a political leader or monarch.

And the phrase “sheep without a shepherd” is a common refrain we see in a number of parts of Scripture that fundamentally refers to people being especially vulnerable to harm – financial, physical, spiritual, familial – because they do not a shepherd who cares for them, tends to them, feeds them, empowers them.

In this case, Mark’s commentary is nod in the direction of King Herod who cares little for the sheep…and it is language that also reminds the reader that the Scriptures spoke of a day when God would come and be the Good Shepherd that the people so desperately needed.

“Jesus saw a great crowd; and he had compassion for them for they were like sheep without a shepherd.”

When Jesus draws near to the crowds, his sees acutely the vulnerabilities, the hungers, the pains, the spaces of lacking…and his fundamental response to all of it is not revulsion or judgment, apathy or benign well-wishes…but compassion.

Have we known Jesus to look upon our lives in this way? To meet us in those most vulnerable spaces and show compassion?

Has someone or someones been the conduit of God’s compassion unto our ache, our hunger, our shame, our vulnerability?

Because often it is someone or someones in the body of Christ who makes known to us this compassion, this ‘co-suffering.’

And that is because, you may recall, Jesus ends his ministry in the Gospel of John exhorting us to “feed my sheep.”

As in, “in the same way I have come ashore and entered the drama of your aches and pains and shames and vulnerabilities and loved…so you do likewise. Feed my sheep.”

Part of what I think it means that we at First Presbyterian Church are a ‘rooted’ congregation is that God has placed us, planted us, rooted us not only in Christ as we spoke about two weeks ago, not only in the FPC family as we considered last week…but in Central Texas and Georgetown specifically.

This is our most immediate crowd gathered upon the shoreline.

How can we look upon our neighborhood, our schools, our business communities, our nonprofits, our civic organizations…and see not “those people,” “the crowds,” people generally around us by sheer accident… but how do we see with compassion those whom God loves?

How easily we can forget we worship a savior whose compassion led him all the way to the cross and even there he looked upon those who put him on that cross – those he had every reason to despise – and cried, “Father forgive them for they know not what they do.”

The center of our faith drips with compassion for all the wrong people, ourselves very much included.

Can we risk seeing with compassion those whom God loves? Is that not one of the most profound ways we lift high the cross of Jesus in our day?

Already many of you have taken first steps if not many steps ashore and toward the crowds – and during the offertory just a bit later in this service we will see highlighted many of the ways you all have drawn near to those around us in Georgetown and Central, Texas.

And if you have taken such steps of faith… then you well know the joys of stepping into this call, and you probably also know about the hardest part of stepping ashore, choosing a seat in the midst of the drama.

You know that to choose compassion is to choose to lose control of what happens next.

Jesus planned to get some rest away. That was the stated intent of what was going to happen next, how this day was going to unfold. It was a good plan, a timely plan, even a needful plan.

And yet he comes ashore and because he sees with compassion…the next thing that happens, we read, is that he is teaching. Later that day he feeds the crowds. Teaching and feeding were not on agenda for that day. They were not the plan.

That really is the thing about choosing a seat in the actual drama: you are drawn right into a script you didn’t write, your whole body feels itself connected to all the other bodies, their energy, their direction – and so you are always wondering when you might next move, where you might next go, how you might next respond as you relate to all these people. Who knows what will come next?

Who knows who we might suddenly be helping, loving, advocating for because we opened ourselves to a feeling sense of co-suffering with another…?

And yet I tell you… I lament that that night in Chicago I chose one of the seats at the periphery where I remained at a distance, outside the drama, and in total control over how much or how little I paid attention or engaged.

It was a good show, but I am convinced I missed out.

I missed out on the vitality and animation that the soul only knows when one risks taking a seat immersed in the heart of the drama.

And, as our story makes clear, stepping in compassion also means stepping in a life-giving direction we could never have known to anticipate.

Because very shortly after Jesus comes ashore and sees with compassion this crowd…very shortly after this, Jesus finds himself famously feeding this same crowd of five thousand with just a couple fish and five loaves.

What began as a willingness to step ashore and see with compassion…ends with one of the most memorable miracles in all of Scripture.

It does make one wonder what miracles God has in store for us as we risk letting our bodies and our hearts take seats in the midst of God’s Kingdom drama going on all around us. And I which seat precisely the Holy Spirit is nudging us to take. Amen. 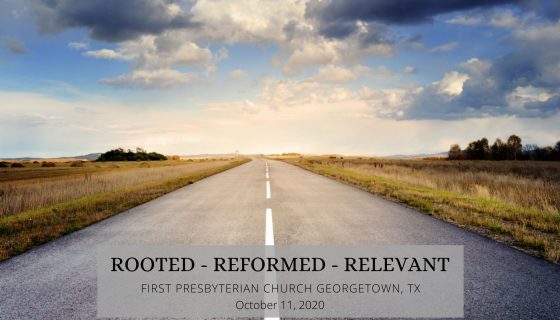