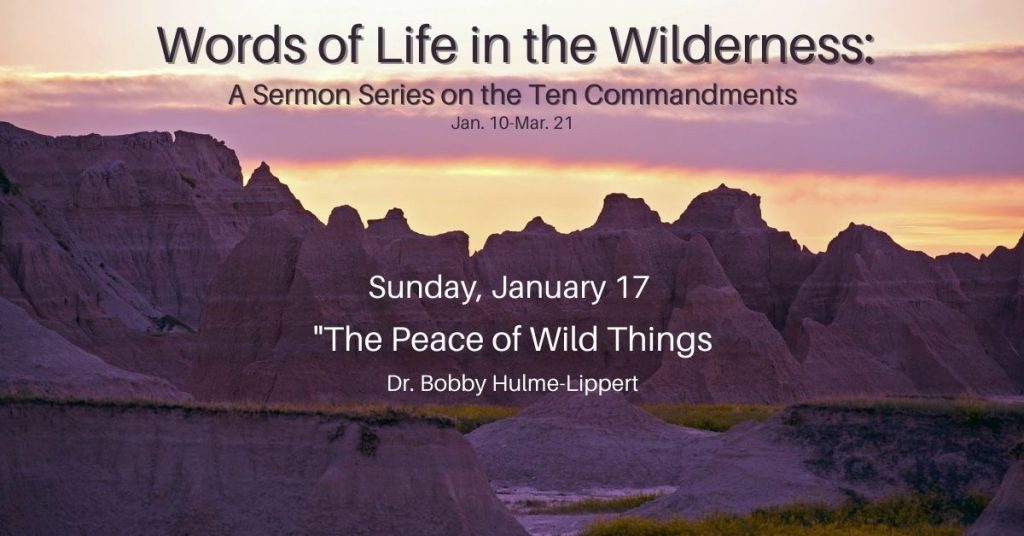 “The Peace of Wild Things”

It was freshman year in high school when all of my classmates and I were assigned a bug collection project to be done in pairs. We were given a number of weeks to collect 25 different insects.

And my best friend and I headed out to begin the assignment, and it was not too long before we saw a butterfly. We watched it flap its colored wings and dive this way and that and then land on a small branch.

We would try and cusp our hands around the butterfly and while I’m sure that works from time to time we were not successful. We would get really close but then it kept fluttering freely away from our grasp.

This is akin to how Scripture speaks of God – we can draw quite near to this God and this God to us, but never can this God be fully grasped or understood.

For instance, God commands the Israelites just a bit later in Exodus, “And have them make me a sanctuary, so that I may dwell among them.” And so the people build a tabernacle and generations later they build a Temple where God dwells. And so you have something manageable and concrete and predictable about where God is to be found.

And yet… even as Solomon builds that Temple he declares to God: “The heavens, even the highest heaven, cannot contain you. How much less this temple I have built!”

The Temple and its architecture do so much to help the people understand God and know where and how to meet God…but then even the Temple in all of its glory just cannot fully or nearly contain all that God is and all that God is doing.

Eventually, God draws so near, so graspable, as to be present in the flesh (“What does God look like?” asked Scarlett). The most concise and faithful answer we could give is: Jesus.

Jesus is the image of the invisible God, as we heard in the Colossians reading. He walked among us – and we are assured today that Jesus is with us and even in us by the power of the Holy Spirit.

And yet, as clear a picture as Jesus is of God, as near and graspable as Jesus is…Jesus’s ministry made it equally clear that there was so much that was unpredictable and unexpected when it comes to how and where to whom and through whom he might show up.

…In A feeding trough, …In a Gentile Roman officer who wields the sword on behalf of the unjust Empire, …To a common thief on a cross, …Through a woman whose been married five times, …In in the tomb of death itself…

No wonder the Apostle Paul eventually offers prayers like that in Romans: “O the depth of the riches and wisdom and knowledge of God! How unsearchable are his judgments and how inscrutable his ways!”

You can draw near the butterfly, but never can you grasp the full beauty and wonder.

Where things go off track is when we do try and pin God down.

Our official assignment in 9th grade was to catch the 25 insects, pin them with a needle onto a Styrofoam board, label them with their scientific name, and then provide a short blurb about some of their basic characteristics.

And so my friend and I got wise. We found a net and caught the butterfly. And the butterfly then joined the other insects we collected pinned named and summarized.

It was not until many years later I reflected on the irony of my class. Biology.

“ology” the study of.

A class on the study of life – and never once did we study the butterfly while it was in flight. We caught it. We examined it and poked at it and summarized it – and yes you can learn important things from all of this – but no part of the assignment involved watching in wonder.

At its essence, the second commandment is all about keeping the people of God from trying to pin God down into something manageable, controllable, formable, explainable, imaginable, summarize-able.

As St. Augustine put it, “If you do understand, then it is not God.” If you have pinned it down…not God.

The most literal interpretation of this commandment means that making a statue and calling that image “god” is contrary to this commandment for it reduces god to the manageable and formable. It pins god down to this little statue.

We don’t see a lot of that kind of thing in our culture. The images we make for God unfold in a different sort of way.

Think of some of the more powerful experiences of Jesus and his leading and his love that we have known.

Maybe through a tragedy…

Perhaps you recall a season of vibrant prayer…

or a time when you served among the most marginalized….

…We all have stories of when God has beautifully and lovingly and strongly led us, filled us, awed us, beckoned us.

And we give thanks.

So for instance, we become enamored with a former church or former version of the same church and how things once ran and what people were like and what programs and music they had because that is the image of what God alive really looks like. And we catch and pin that image in our hearts.

Or we become enamored with a mission trip or times of truly meaningful service or advocacy because that is the image of what God alive really looks like. And we catch and pin that image in our hearts.

Or we become enamored with particular theology or line of teaching and that then that doctrine becomes the image of what God alive really alive looks like. And they catch and pin that manageable system as God.

Or we become enamored with a particular sanctuary or a particular place in the city or the country and that becomes the image of what God alive really looks like. And they catch and pin that location as God.

Or we maybe we become enamored with a particular mentor or parent or theologian or teacher and that becomes the image of what God alive really looks like. And we catch and pin that person as God.

It was the day before our insect project was due, and we were two or three insects short of the requirement. And while I am not proud of this, the truth is we went into my friend’s basement and found his older sister’s bug project. His older sister, by the way, was five years older than us. We found that five-year-old bug project. And we saw that she had a full 25 bugs – we could just take the couple we needed and be done.

But we noticed that her dead bugs looked really dead. It had been a few years and so they were noticeably more dried out and colorless than ours.

And for some reason, we thought: “Well, let’s put her project – this Styrofoam base with 25 bugs stuck with metal pins – let’s put it in the microwave. A quick re-heating will surely bring back some of the color.”

So we did. We pressed on and walked away to do something else. And in one of the more memorable moments of my life, I turned around a few seconds later watched in horror as the metal pins began sparking inside my friend’s microwave and the bugs began catching fire and splattering all over.

You cannot reheat a dead butterfly. And we cannot reheat the way it used to be in our family or the job or the country or the church – – however alive God may have been beautifully alive in some of those memories.

And actually, not only does it not work but if you try to reheat a dead butterfly, it actually splatters the deadness even further.

This is why in the second commandment God says that those who do create and worship images of God will know punishment to the 3rd and 4th generation.

The verb there is not indicating an ‘if/then ’kinda thing – if you make an image of God then God’s hammer comes down!

But rather the sense is if you become enamored with an image that is dead and spend your time and focus and energy believing it will eventually bring life… that will have repercussions and that deadness will splatter onto future generations. It will get passed along.

How often we long to get back to something or someone – especially in this pandemic. But what if in this wilderness experience of ours, God is doing a powerful and beautiful new thing that we can see all the more clearly if we let our hands stop grasping?

There is a poem by Wendell Berry that I have long appreciated because of its counterintuitive insight. It’s called“ The Peace of Wild Things”:

When despair for the world grows in me
and I wake in the night at the least sound
in fear of what my life and my children’s lives may be,
I go and lie down where the wood drake
rests in his beauty on the water, and the green heron feeds.
I come into the place of wild things
who do not tax their lives with forethought
of grief. I come into the presence of still water.
And I feel above me the day-blind stars
waiting with their light. For a time
I rest in the grace of the world, and am free.

When the world is falling apart and tragedy is known and fear abounds….I don’t go back to my warm memory images and try to kindle a warm, familiar fire.

I go at night to the place of ‘wild things.’ He goes outside. In his case, it’s the dark woods of water and herons and creatures that lurk unpredictably and quietly.

And Berry calls life amid the unpredictable, wild things…peace.

Where is the place of wild things?

Or the place where it’s just dark?

“Behold,” the God cries through the prophet, “I am doing a new thing! Now it springs up; do you not perceive it? I am making a way in the wilderness and streams in the wasteland.” 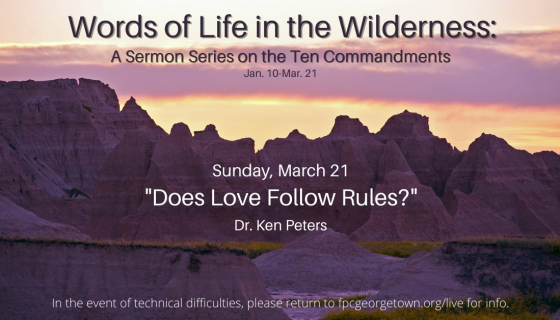 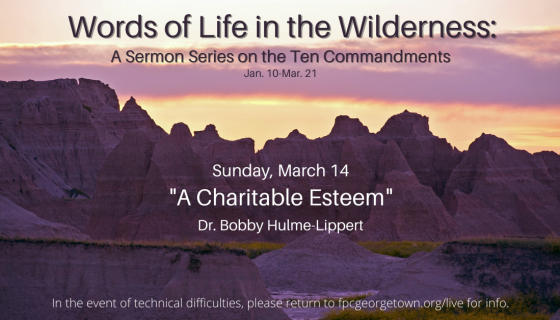 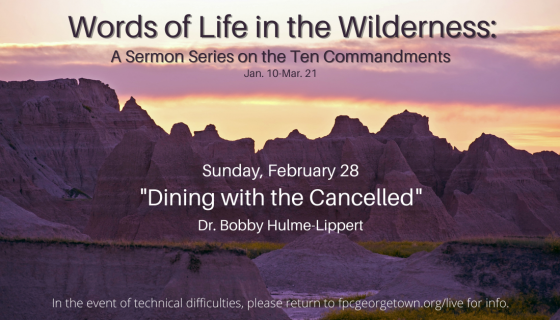