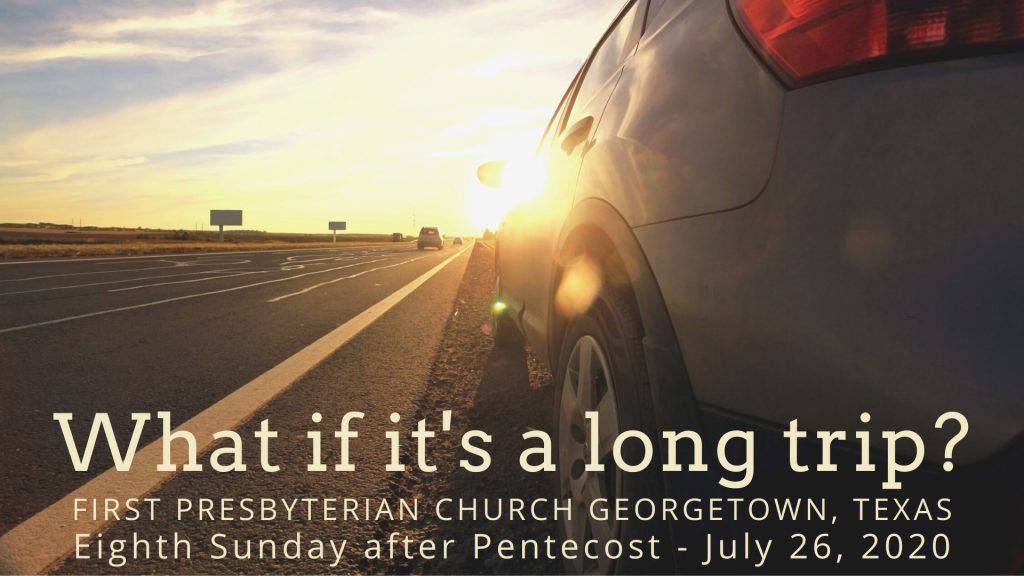 “The Sound of the Church”

Ezra is a book in the Hebrew Scriptures of our Bible, and it basically tells some of the story of when the Israelites are invited back into Jerusalem. Quick recap in case you your fuzzy on the details:

It was because of the Israelites’ unfaithfulness to God and God’s ways as well as because of external enemies that eventually led to the Israelites to be exiled from Jerusalem by the Babylonian Empire. This meant that their beloved Temple build under the reign of King Solomon – it was destroyed. Later today you might go read 1 Kings chapter 6 to see just how magnificent this Temple was with all kinds of gold, silver, bronze, cedar, iron, and precious stones used as the materials for this stunning Temple space in which God most especially dwelt. And then suddenly, quite swiftly, quite painfully – no more Temple.

But….times changed and eventually a benign ruler named Cyrus invited the Israelites back to Jerusalem. He told them they could rebuild a Temple. Which is what is unfolding in our reading from Ezra: The builders are laying a new foundation – we hear many of them are the ‘sons’ of so and so…they are the younger generation. And around the builders are priests playing jubilant trumpets and clashing triumphant symbols. Everyone is singing. Can you hear the joy of a new beginning?

I remember spending a week serving with Habitat for Humanity in Tuscaloosa, AL where we were helping rebuild after the tornadoes came through 7 or 8 years. My team spent the entire week putting in one, wood floor. That was it. We left after a week having, in my mind, done so little in light of all that needed to be done. So I asked one of the Habitat workers about this.

I said, “Wouldn’t it be better if you guys who are here all the time made these houses and didn’t worry about having us volunteers show up? We’re so slow! Most of us are really not experienced with this kind of work!” Then I pointed down the street and added, “I mean look – there are so many more houses to build and foundations to be poured, why don’t you just get professionals to do this rather than have all of us novice volunteers out here?”

And he goes, “For one, volunteer labor is cost-effective.” But then he said, “Even if we had the money, I’ve learned sometimes, honestly, professionals aren’t the best option because too many of them do it for the money and don’t truly care about the product.” “Volunteers,” he went on, “they actually ask the question, ‘Would I want this done to my house?’ Volunteers build with love, and that makes a huge difference… at the end of the day Habitat for Humanity Houses are really well built because of the volunteers who care.”

One senses the foundation being laid in the new Temple here in the book of Ezra is one of love – thoughtful, excited about the new start, trumpets out. It’s a hopeful sound. And, on one hand, haven’t these recent days given us a new sense of hope? I mean we would never have asked for the old Temple to be put on pause for this long and have to wonder what it even looks like when we return in-person but…
My goodness…

God is surely laying a foundation for something new – and I wonder what other stones of joy you might add to what I have just named. And…even so, it’s not the same is it?

And we are not alone in that recognition. You may recall in our passage in Ezra that right after the verses that speak of the joyful builders and trumpets, we hear this: “But …many of the priests and Levites and heads of families, old people who had seen the first house on its foundations, wept with a loud voice when they saw this house.”

The older ones, those who could remember the massive, beautiful Temple way back before it was destroyed, they wept. This new Temple was just so. much. smaller. The people are different. It’s not like how things used to be. For some today, the church hasn’t been the same for years – not like the massive, beautiful church we grew up in some decades ago. And for others the lament stems most acutely from the fact that it’s not like it was just four months ago.

This is not the Temple we’ve known and loved and rejoiced in all those years. Perhaps we do not openly or even regularly weep in these recent days – but I also find that oftentimes when complaining or critical spirit begins speaking up more frequently in the heart – behind that is grief. Behind that is a sense of loss. Have we known something of this weeping wanting to come out in recent days?

Our final verse from Ezra sums up just how this gathering of God’s people, then, sounds in this moment of newness and lament: “the people could not distinguish the sound of the joyful shout from the sound of the people’s weeping, for the people shouted so loudly that the sound was heard far away.”

Ever played a beautiful triumphant major chord on the piano at the same time you play a dour even shrill minor chord? Notes of joy and hope and notes of weeping and longing – at the same time. I wonder if that might be the sound in our church today. I wonder if that isn’t the sounds in some of our individual hearts. And truly both joy and weeping are unavoidably faithful, biblical expressions of the long journey. In fact, it would become problematic if we started to hear only one of those sounds all of the time and did not have room for the honest faithfulness of both.

Let me add one more sound, however, for us to consider as I think it might help us draw all the more closely to where is God in our midst and the precise sound of the church right now:

C.S. Lewis once wrote, “Imagine yourself as a living house. God comes in to rebuild that house. At first, perhaps, you can understand what He is doing. He is getting the drains right and stopping the leaks in the roof and so on: you knew that those jobs needed doing and so you are not surprised. But presently He starts knocking the house about in a way that hurts abominably and does not seem to make sense. What on earth is He up to? The explanation is that He is building quite a different house from the one you thought of — throwing out a new wing here, putting on an extra floor there, running up towers, making courtyards. You thought you were going to be made into a decent little cottage: but He is building a palace. He intends to come and live in it Himself.”

Lewis is riffing on Scriptures like Ephesians 2:22 which declares, “(we) are being built together to become a dwelling in which God lives by his Spirit.” We – the church of God – we are the new and glorious Temple where God’s abides. And all of us, as Lewis makes vividly clear, are under construction, ever-making room for the fullness and love of God. Can you hear that noise? The hammers and nails, the saws and shovels of the Holy Spirit making room?

If you are not sure where the Holy Spirit is currently doing active construction work – here is what I would suggest: listen for the pain points.

In fact, the truth is if we can name some of the areas in our lives and our church where we hear the construction the loudest and the pain points are most acute…

It was the commingling sound of an infant’s cry and angelic hosts singing which marked that the renovation of humanity was underway and a new kingdom was being built. Construction is good news. It means God is active and faithful. And though this day we may only be able to point what seems just a single wood floor as under construction – that which is hammered in love is truly a mighty and enduring work.

Where do we hear the sound of construction? And how might we pick up a hammer and join in the laying of God’s new foundation?