In 1863, at the age of 18 Charles Appleton Longfellow left his childhood home in Cambridge, Massachusetts. He would fight in the war, and receive a serious wound to the shoulder later that same year. He was rushed home, and when his father first saw him the doctor said the injury is quite bad, he may not live, and lifelong paralysis is real possibility.

That December, as Christmas day neared, Charles’ father, Henry Wadsworth Longfellow, sat in a space of profound dissonance – the promise of cheer on its way, the realities of war and death.

He wrote poem that month called Christmas Bells. It begins:

I heard the bells on Christmas Day Their old, familiar carols play, And wild and sweet The words repeat Of peace on earth, good-will to men!

Then from each black, accursed mouth The cannon thundered in the South, And with the sound The carols drowned Of peace on earth, good-will to men!

It was as if an earthquake rent The hearth-stones of a continent, And made forlorn The households born Of peace on earth, good-will to men!

Bells singing forth the good news…drowned by the weighty evils of Longfellow’s day. Rejoice in the Lord, again I say, Rejoice.

Words that ring forth like beautiful bells, but depending on how we arrived today, those words may be easily drowned by any number of things.

And Paul himself wrote these words from prison to a church community again experiencing internal and external challenges.

Yet notice where Paul says to ‘rejoice.’ …In the Lord.

Paul does not point our eyes toward the circumstances or the foreboding clouds on the horizon… and certainly Paul is not avoiding their reality.

Rejoice, take joy, celebrate not because of the circumstances but because of who Jesus in their midst, who Jesus promises to be. Rejoice in the Lord.

Perhaps that is why many of us are here today.

We could certainly be taking the time to address any number of the circumstances in our lives or out in the world…and yet perhaps almost unconsciously amid all the canons and noise and pain and frustration – we recognize our need to know a different centering amidst it all; a different hope greater than ourselves. We need God.

And thanks be to God that Paul declares in the heart of our passage, “The Lord is near.”

What is it we often sing so clearly on Christmas Eve? Joy the world the Lord is… come.

And then do you remember the next line? “Let earth receive her King?”

And so another way to put it is this: amid all the circumstances that weigh upon us and this weary world, perhaps we gather quite simply that we might receive the One who is already come to heal, to save, to make new.

There is joy in that.

And how might we as a people know that we have received afresh the gift of Jesus and his hope? Very practically, what does “rejoicing in the Lord” look like? What form does it take in the world? There’s a lot that could be said here but for this morning I’ll underscore one aspect.

I recently heard on NPR the story of a woman, Stephanie, who in her young adult years joined an Alcoholics Anonymous group – and this group really did help her get sober amid some relapses.

And one of the more critical people in the group for Stephanie was a woman named Kim. Kim told Stephanie to call anytime if Stephanie needed anything. On one occasion, as Stephanie relapsed and was at a pretty low point about even wanting to live, she called Kim and Kim was there in minutes and quite literally saved her life.

Kim went on to assist Stephanie on numerous fronts over the course of a couple of years – she helped Stephanie with lodging and transportation at times, she helped oversee Stephanie’s finances during a couple periods of relapse so as to ensure bills and rent were paid on time.

Kim even moved all of Stephanie’s stuff out of her apartment and put it into storage for Stephanie at a point where Stephanie was in treatment and it was apparent that Stephanie would not be able to continue affording her place.

Eventually, Stephanie is completely sober without issue, and she is over at Kim’s apartment and goes, “Oh, wow…that’s my couch.’ (The one supposedly in storage right now).

Kim explains she just thought she’d go ahead use Stephanie’s since her old one had been in bad shape.

Kim then serves the dinner and Stephanie goes, “Oh wow…these are my plates and silverware too.”

Kim comes clean and says, “Look, it just made more sense to use your stuff than have you paying any longer for the storage unit.” Strange but ok….until Stephanie goes home and checks her online bank account where her $21,000 of savings was held. And it’s empty.

Long story short, she calls Kim about this who quickly says she has to be somewhere “but we will talk about this soon.”

And then suddenly Kim becomes hard to track down. Stephanie calls the police on her and Kim is arrested by the police for identity theft and stealing.

And in the days between the arrest and the courtroom sentencing date Stephanie reflects a lot on human nature. How is that people can be full of such goodness and also such deception? Such kindness – but also the ability to just destroy you? Such courage…such weakness?

What I did not mention earlier is that the title of this particular podcast episode is Both Things Can be True: how our minds grapple with contradictions, especially those we see in other people.

On the courtroom date, Kim cannot look Stephanie in the eye the entire time. The judge declares that Kim is to repay all $21,000, and then asks Stephanie, “Is there anything else for which you would like to be compensated?” And Stephanie could easily name a number of things stolen beyond the $21,000.

But listen as she describes how she felt upon hearing that question:

Stephanie finds herself experiencing all the rage and also at the very same time what it is to stand in Kim’s place and feel the contradictions that she also knows live within her.

And so finally Stephanie speaks aloud from a place that feels all the anger and all the empathy: “I only hope that she can find peace.”

It is so… gentle. Perhaps confusingly so. Maddeningly so. This really is your moment to lay it on thick.

“let your gentleness be known to all” Paul declares right on the heels of his exhortation to rejoice in the Lord always. Because one of the practical signs that we have received afresh the Lord who is drawn near; one of the more practical ways we show forth a joy in the Lord – it is by way of surprising gentleness.

The particular word for “gentleness” in Greek is fairly difficult to translate to English but it has connotations of being magnanimous; it is strongly related to showing mercy.

Paul reminds the church of Thessalonica about a previous visit he made, saying, “we could have been a burden to you (we could have laid it on thick, some of the things we needed to talk to you about), but we were gentle among you, like a mother caring for her little children.” 1 Thes 2:6

I belabor the point because for many people in our time – ‘gentleness’ seems largely foolish.

Gentleness sounds nice when caring for children or someone quite elderly, but it sounds like being steam-rolled when you are talking about the real world situations. You can’t be gentle in the workplace or politics or social media or when that part of the family has been doing this or that for this many years or when that person is betraying your trust and stealing from you.

Save those Scriptures for another day.

And yet… what Stephanie goes on to recount as she looks back on that courtroom experience she had and the words she offered there now 10 years ago is this: “I’ve been saved from wanting revenge…I have been saved from harboring bitterness for her and toward her…I feel peace.” For her, gentleness was strength – for these past 10 years that gentleness has guarded quite effectively against revenge and bitterness and ravages they inevitably bring upon the soul and others.

To be sure… I cannot venture the precise thing we should or should not do in any number of the challenging situations before us, especially the ones involving difficult people and their actions or inactions…what I know is this:

We worship a crucified Savior who – upon the cross – looked at those doing violence to him, those who had betrayed, those who had stood silent – all these people in all of their contradictions each now proving themselves worthy of condemnation…and what did he declare?

“Father, forgive them for they know not what they do.”

We stand under the verdict of a fundamentally gentle word.

A God who sees us for who we are, who we have been, what we have done and not done, a God who sees us in all of our contradictions…and the verdict is love. Have you known this? Has someone in the body of God ever shown this level of gentleness even when all your starkest contradictions were laid bare?

There is great joy to be known in this embrace.

And…if we have known such gentleness ourselves…how can we not seek to somehow give that same gift to others amid all their contradictions? How can we not be a people who lead with mercy?

Henry Wadsworth Longfellow wrote one final stanza to his poem that moved from the bells of Christmas to the noise of canons and the hate and despair.

And he wrote this particular, final stanza far before he ever knew that his son Charles would, in fact, live and miraculously be healed.

The final stanza is this:

“Then pealed the bells more loud and deep: “God is not dead, nor doth He sleep; The Wrong shall fail, The Right prevail, With peace on earth, good-will to men.”

…can you imagine amid headlines of our age that often play so loudly and incessantly that there pealed bells yet more loud and deep – and they were the church showing forth a still deeper strength…through gentleness.

Making their joy known through gentleness.

Then, perhaps, it would not only be the Scripture declaring the Lord is near this Advent season, but the world around could join the chorus – the Lord is, indeed, near. Listen to the bells. Amen. 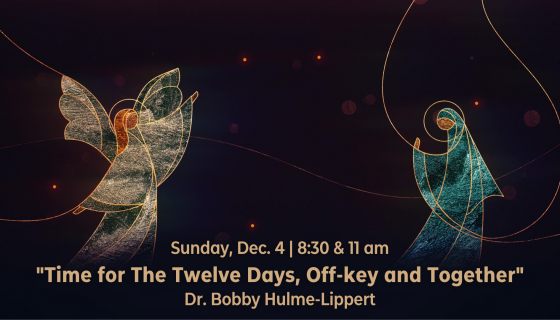 “Time for The Twelve Days, Off-key and Together” 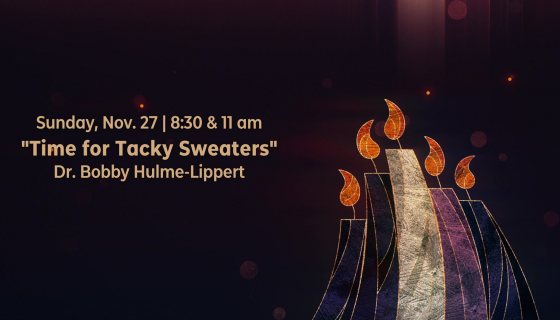