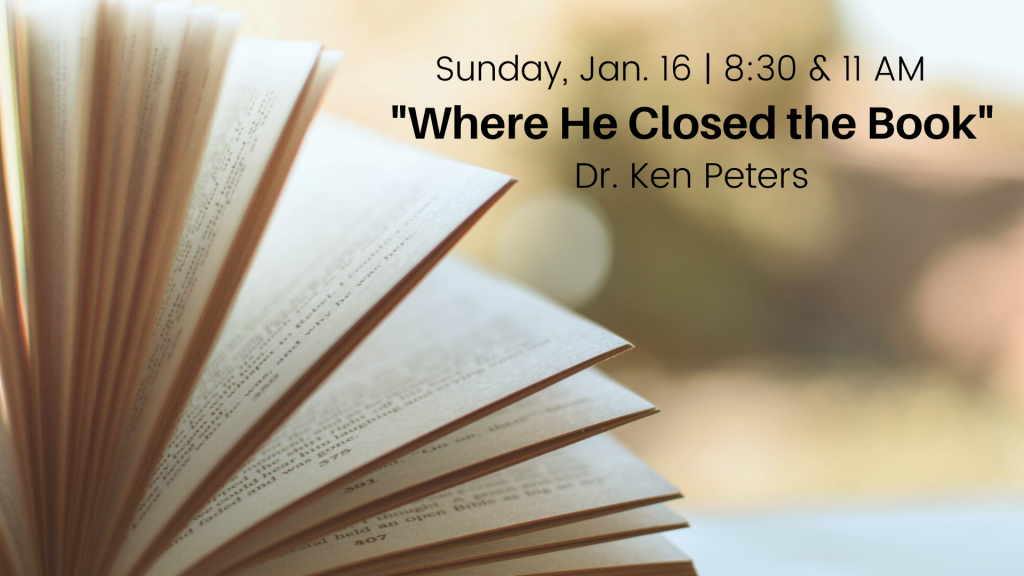 “Where He Closed the Book”

An important task for the preacher is deciding not just on the text, but how long the text should be – where it starts and where it stops, in other words. There is a fancy word for that; it’s called the pericope, a Greek word preachers like because it sounds more important than deciding where to start and stop, but that’s what it means. Sometimes setting the pericope is easy. If the reading is a parable, like, say, the parable of the mustard seed, you read the parable. If it’s a story with a clear beginning, middle and end, you read the story.

But it isn’t always that easy. If your text is Psalm 119, for example, I don’t think you would want to read all 176 verses, although I’m sure some preacher has, and even preached on them!

A few minutes ago, Kathy read from Isaiah 61, vv. 2-7, and then she stopped. Was that a good stopping place? Perhaps she should have read, maybe even to the end of the chapter. It’s an interesting problem.

I don’t want to put any pressure on Kathy, because it was I who decided to stop at verse 7, but this was exactly the problem Jesus had to think about when he came back to Nazareth, the town where he had grown up.

He went into the synagogue, as his custom was, on the sabbath day, and he stood up to read. There was given to him the book of the prophet Isaiah, and he opened the book to chapter 61, exactly the chapter Kathy opened the book to this morning, and he began to read: “The Spirit of the Lord is upon me, because he has anointed me to preach good news to the poor. He has sent me to proclaim release to the captives, and recovering of sight to the blind, to set at liberty those who are oppressed, to proclaim the year of the Lord’s favor.”

And right there, it says, right there “He closed the book.” Now, what is significant about that? If he had read one verse more, these are the words he would have read: “to set at liberty those who are oppressed, to proclaim the year of the Lord’s favor AND THE DAY OF VENGEANCE OF OUR GOD.” But before he read that, he closed the book.

Isaiah is, to my mind, the most wonderful book in the Old Testament – I am tempted to say the most wonderful book in the whole Bible. Its imagery, its poetry, its power and beauty are unsurpassed: “The Spirit of the Lord is upon me, because he has anointed me to preach good news to the poor. He has sent me to proclaim release to the captives and recovering of sight to the blind, to set at liberty those who are oppressed, to proclaim the year of the Lord’s favor.” Magnificent.

The comfort in Isaiah is likewise unexcelled. I thought of these words yesterday, at the service when we closed the book on the earthly life of our friend Gene Gregory. And I thought especially of Carolyn, such a dear and gentle spirit, to whom words of comfort were spoken by Bill and members of her family. And to their words could we add these of Isaiah: “To comfort all who mourn; to grant to those who mourn in Zion – to give them a garland instead of ashes, the oil of gladness instead of mourning, the mantle of praise instead of a faint spirit.”

But just preceding those words of Isaiah are these: “to proclaim the year of the Lord’s favor and the day of vengeance of our God.” The vengeance of God is something Isaiah cannot get out of his mind. It is something he comes back to over and over again. He cannot forget it, he cannot factor it out of even his most exalted poetry. One of the saddest facts of the Bible is how Isaiah ends, at 66:22- 24: “For as the new heaven and the new earth which I shall make shall remain before me, says the Lord, so shall your descendants and your name remain. From new moon to new moon, and from sabbath to sabbath, all flesh shall come to worship before me, says the Lord. AND THEY SHALL GO FORTH AND LOOK ON THE DEAD BODIES OF THE MEN THAT HAVE REBELLED AGAINST ME; FOR THEIR WORM SHALL NOT DIE, THEIR FIRE SHALL NOT BE QUENCHED, AND THEY SHALL BE AN ABHORRENCE TO ALL FLESH.” The book of Isiah ends with a curse. Why could he not have closed the book short of these last two verses?

But not only Isaiah. What were the last words of Jeremiah? If we take them to be the last words of the book of Lamentations, they are these: “Restore us to thyself, 0 Lord, that we may be restored! Renew our days as of old! Or Hast thou utterly rejected us? Art thou exceedingly angry with us?”

Or from Joel: Judah shall be inhabited forever, and Jerusalem for all generations. I will avenge their blood, and I will not clear the guilty, for the Lord dwells in Zion.”

And the very last words of the Old Testament, Malachi’s: “And he will turn the hearts of fathers to their children and the hearts of children to their fathers, lest I come and smite the land with a curse.” The”Oid Testament ends with the threat of a curse. It ends threatening the great and terrible day of the Lord, the day of vengeance of our God.

And it was just before Jesus came to those words that he closed the book. God, you see, turned out to be far more gracious than Isaiah imagined.

Who was this servant figure Isaiah had written about? This messianic figure not only to the Jews but also to the Gentiles – that was one of Isaiah’s great feats of imagination. But I doubt that even Isaiah comprehended it fully. I think surely he would have agreed with Paul: “For now we see in a mirror dimly, but then face to face. Now I know in part; then I shall understand fully.” Christ turned out to be more gracious than Paul could have imagined.

Christ has been more gracious than the apostle John imagined. John’s description of the apocalypse, with all its terrors, and the almost morbid curiosity it has inspired in predicting the vengeance of God on our enemies – that day, now 2,000 years removed from John’s time – has not come, and why should we want it to? To return to the prophet Malachi: “But who shall abide the day of his coming, and who shall stand when he appeareth?”

What, then, shall we do with the grace of God? We can trade on it cheaply or treat it frivolously, as the poet Heine did. Heine, the greatest German lyric poet of his or any other age, lived a short and dissolute life, mostly in Paris, and when his life was coming to an end, his friends inquired cautiously about his dying thoughts. “O God will forgive me,” he said. “That is his business.”

Well, I hope God did forgive him, and forgiveness is God’s business, but we can we not do better to resort to the kind of cheap grace (to use Bonhoeffer’s term) that Heine counted on so thoughtlessly? We can do better. In even the smallest measure we can be as gracious in our discipleship as Jesus in his lordship.

“The Spirit of the Lord is upon me, and has anointed me … to proclaim the year of the Lord’s favor.” And there, right there, is where Jesus closed the book. Amen. 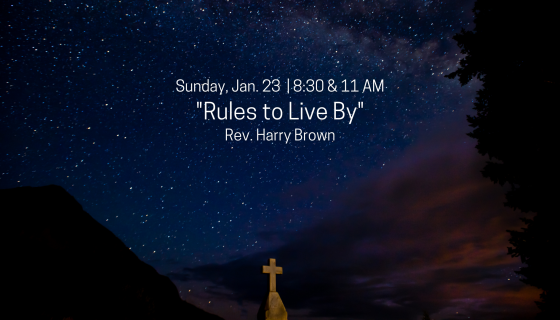 “Rules to Live By”